Tonight we had two different vegan pizzas, a gluten-free margherita by Kirsty’s and one described as caponata sourdough by Wicked Kitchen (vegan range at Tesco). I hadn’t intended to make two. I had ordered the Wicked Kitchen one in our groceries this week, but when it arrived it was really really small. 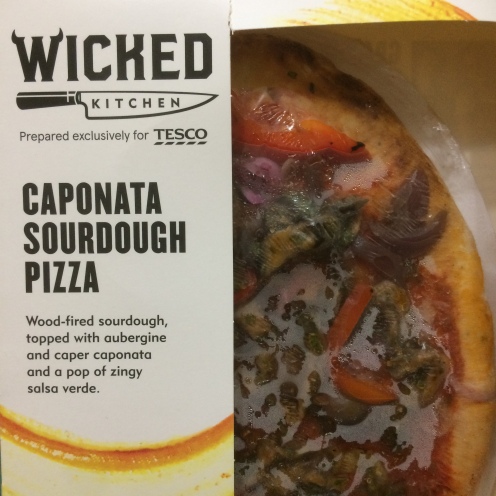 In fact, here’s the thing, I wouldn’t really describe it as a pizza. It’s more like a side dish. And call me a traditionalist, but I think a pizza should have cheese on – this one has none. It doesn’t need much, but I think it should have some. However, despite its size and lack of cheese, this did taste good. The sourdough base was great. It had some fancy ingredients on top, and came with a sachet of salsa verde.

I knew the Wicked Kitchen pizza wouldn’t be enough for two, so I picked-up the Kirtsy’s one on the way home. I wanted something more interesting than just cheese and tomato, so I added some olives and capers, and some of the salsa verde.

The Verdict
With the addition of the toppings, the Kirsty’s pizza was the winner. The base was thin and crispy and really impressive given that it was gluten free. There was plenty of vegan cheese, but it didn’t have that horrible fake flavour that so many of them have – it just tasted like a margherita pizza! I don’t want to knock the Wicked Kitchen one, it tastes good, and it’s great that Tesco have this growing vegan range. It was just too small!